Yohji Yamamoto: The Poet of Black

The iconic Victoria and Albert museum in London has done it again.

Beginning on the 12th of March 2011 and ending on 10th July, 2011, the art and design hub features a retrospective on the work of idiosyncratic and ground-breaking fashion designer, Yohji Yamamoto.

Now nearing seventy years old, Yamamoto became internationally renowned in the early eighties for challenging traditional notions of fashion by designing garments that seemed oversized, unfinished, and played with fabrics not normally used in high fashion such as felt or neoprene.

His work is characterized by a frequent and skilful use of black, a color which he describes as ‘modest and arrogant at the same time’.

In this 20-minute film shot in his Tokyo studio, Yohji Yamamoto reflects on his thirty year career in fashion.

All images courtesy of the V&A museum. 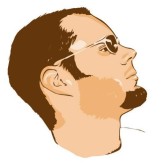